Eating a balanced diet during pregnancy

Being pregnant is a special time in your life, and it’s a time when many women think about their diet. What you eat can not only influence your own health, but it can also affect the short- and long-term health of your baby, so it is important that you eat a healthy, balanced and varied diet when you are pregnant.

The basic principles of a healthy diet stay the same. You should still eat a diet that includes:

You should only eat limited amounts of foods and drinks that are high in fat and sugar, if at all. You can find more information on our page on a healthy, balanced diet.

As well as having a healthy diet, it is also important to be aware of food safety and hygiene. There are certain foods and drinks that you should avoid or be careful with how much you eat or drink when pregnant. For more information see our page on what not to eat when pregnant. 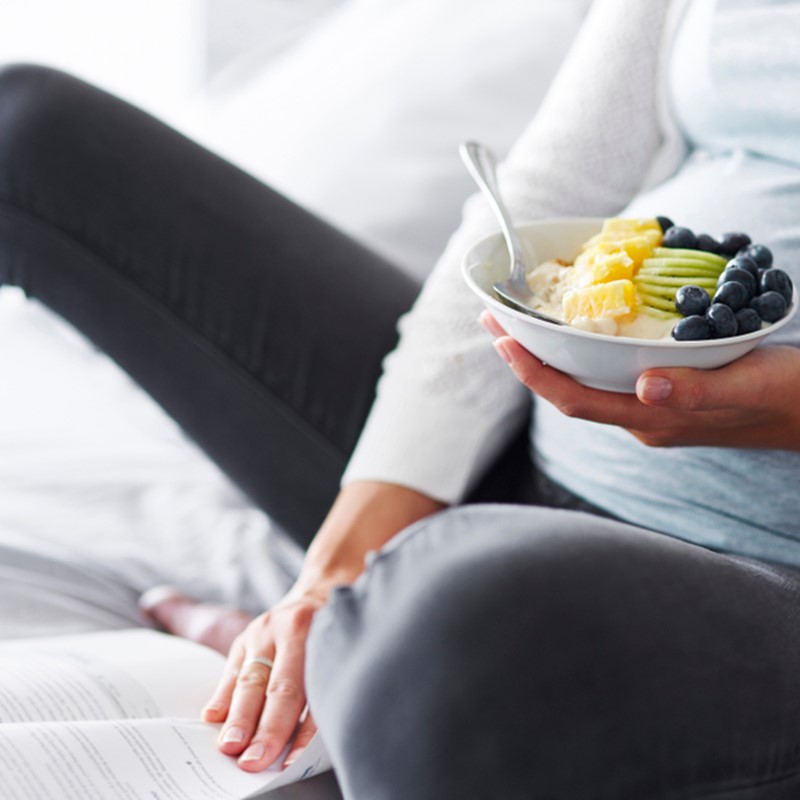 Beside all the nutrients you get from a healthy, varied diet, there are some vitamins and minerals that are especially important for the development of your baby.

You may have heard or read about needing to take a folic acid supplement or eat more folate (this is what folic acid is called when its naturally present in foods).

You should also try to consume more foods that contain folate (the natural form of folic acid). These are foods such as oranges, berries, green leafy vegetables, beetroot, beans and brown bread.

You should take a 400µg (micrograms) folic acid supplement daily up to the 12th week of your pregnancy.

This vitamin is particularly important for the growth and development of your baby’s bones and helps to maintain the health of your bones too. Your skin produces vitamin D when it is exposed to sunlight, but the sun in the UK is only strong enough to produce vitamin D in the summer months (late March/April to the end of September). Also, there are relatively few food sources of vitamin D (including oily fish, fat spreads, eggs, fortified foods), and so it is recommended that all adults in the UK should take a daily supplement containing 10μg (micrograms) of vitamin D during the autumn and winter months to help protect bone and muscle health.

This advice also applies to pregnant and breastfeeding women. However, if you are not exposed to much sunlight (for example if you cover your skin or spend a large amount of time indoors), or if you have dark skin (for example you have an African, African-Caribbean or South Asian background), your skin will not produce as much vitamin D naturally from sunlight. Therefore, you should take a daily supplement containing 10μg (micrograms) of vitamin D all year round.

Avoid too much vitamin A

Vitamin A is important for good health and for the healthy development of your baby, but large amounts can harm your unborn baby, causing malformations. You should not take any supplements containing vitamin A or retinol (also watch out for multivitamin supplements which may contain these, and fish liver oil supplements, such as cod liver oil). Also, you should avoid eating liver and liver products (such as liver pate) because they are very high in vitamin A.

Did you know iron requirements are higher during pregnancy? Your body needs extra iron to ensure your baby has a sufficient blood supply and receives necessary oxygen and nutrients.

Iron supplements are not routinely offered to pregnant women because it has been increasingly recognised that the body becomes more efficient at absorbing iron as the pregnancy progresses. Without the loss of blood through monthly periods, you keep more of your body’s iron stores too.

However, it can be common for women to develop iron deficiency during pregnancy, so when you are pregnant you should eat plenty of foods containing iron. Iron is found in red meat (like beef and lamb), beans and other pulses, nuts, eggs, green leafy vegetables (such as watercress), wholemeal bread, dried fruit, and fortified foods (such as breakfast cereals). Vitamin C helps your body absorb the iron from plant sources. So, you will absorb more of the iron from a meal such as beans on toast if you have a glass of fruit juice with it. Tea or coffee can decrease the amount of iron your body absorbs from plant sources, so try not to consume these with meals.

Iron supplements may be recommended by your midwife or GP if the iron levels in your blood are found to be too low – ask your GP if you are worried about your iron levels.

Long-chain omega-3 fatty acids, particularly DHA (docosahexaenoic acid) found in oily fish (such as salmon, sardines and mackerel), are important for the development of your baby’s brain and eyes. However, pregnant women should eat oily fish in moderation, with a maximum of two portions a week (a portion is 140g, cooked weight) as oily fish can contain low levels of pollutants that can build up in the body. For guidance on how much and which type of fish you can eat, see the table below.

Omega-3 fatty acids are good for a baby's development. So, remember, don't give up eating oily fish (one to two portions a week is great) but do not eat more than the recommended maximum. If you do not eat oily fish, you could try to look out for products fortified with omega-3 DHA, such as eggs. If you decide to take a supplement, make sure that the supplement is suitable for pregnant women, as some fish oil supplements contain a high amount of vitamin A (such as cod liver oil), which you should avoid during pregnancy.

Calcium is important for the growth and development of your baby’s bones and helps to maintain your bones as well.

Did you know that calcium demands on the mother are high during the latter stages of pregnancy and during lactation? The skeleton of full-term infants has 20–30g of calcium, most of which is accrued during the last trimester of pregnancy. Nature is a clever thing, and your body adapts so that it can absorb more calcium from the food you eat.