Find out more information about diet and cancer risk.

The science of diet and cancer risk 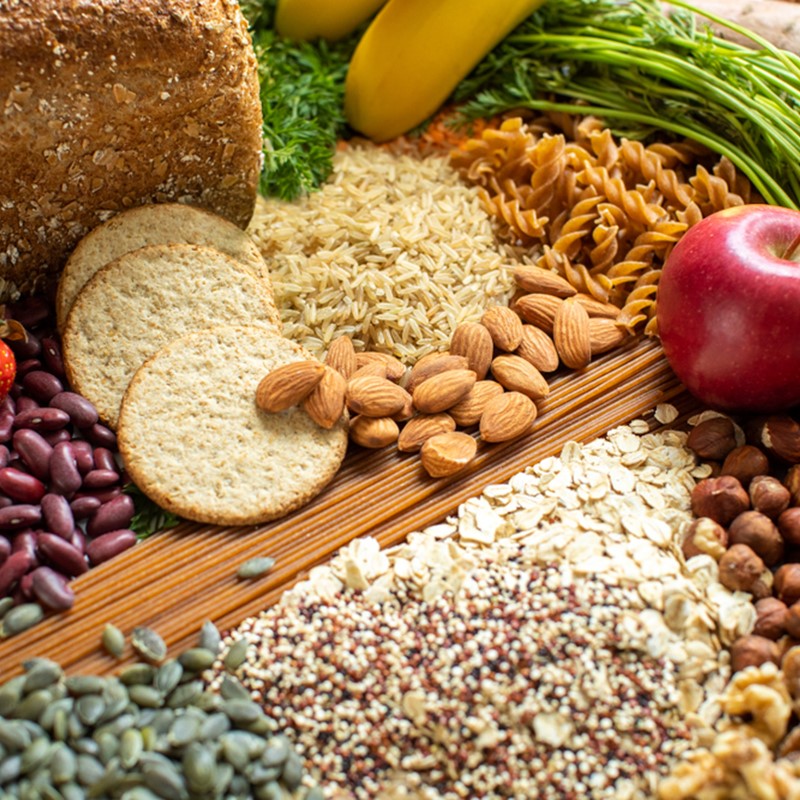 The prevalence of different cancers varies within the population, as do their severity and outcome following treatment. Within the UK, the most prevalent three cancers that result in death in men are lung, prostate and colorectal and in women are lung, breast and colorectal. Cancer is generally more common in older than younger people, although there are some particular cancers that are more likely to occur in younger people e.g. some bone cancers and Hodgkinson’s lymphoma.

Cancer is a group of over 100 diseases, characterised by abnormal cell growth. In the body, cells are continually being renewed and replaced through a carefully regulated process of cell reproduction and cell death. It only takes the regulation of this process to fail in one cell for cancer to develop. Changes to DNA within a cell can result in the cell being unable to follow the normal cell process and instead grow uncontrollably, forming malignant tumours (cancer). Cancer cells can spread to surrounding tissue, known as metastasis, can invade organs and can occur in any cell in the body. Cancer is usually clinically identified years or decades after the initial DNA damage and most cancers are named after the organ or cell type in which they originated, for example lung cancer or prostate cancer.

Cancer is a complex disease, and whilst research has vastly improved our understanding of how it develops, there are still many unanswered questions. Cancer risk is influenced by a range of different factors, and often develops over a prolonged period of time. Risk can be affected by:

Genetics: Some people have a family history of certain types of cancer. It is often the case that these cancers have a genetic element and, in cases like these, family members are at an increased risk, for example some forms of breast cancer. It is estimated that about 5–10 per cent of cancers result directly from inheriting genes associated with cancer.

Hormones: Some cancers are affected by circulating hormone levels. Breast cancer is one such example, with an increased level of oestrogen exposure during a lifetime (from, for example, early onset of menstruation) increasing a woman’s risk of cancer of the breast. The same applies to cancers of the ovaries and endometrium (womb).

Diet: The regulated cellular process, mentioned previously, can be influenced by food and nutrition, which can either protect the cell from carcinogenesis (development of cancer) or can promote carcinogenesis. The extracellular environment, such as the availability of energy and presence of macro and micronutrients, can affect the ability for a cell to prevent the abnormal growth processes that lead to cancer. However, food and nutrition factors can also negatively influence the cell process.

In 2007, the World Cancer Research Fund (WCRF) published the most comprehensive report available to date, on the links between cancer and diet, physical activity and bodyweight. The report: ‘WCRF/AICRs Second Expert Report: Food, Nutrition, Physical Activity, and the Prevention of Cancer: a Global Perspective' follows a first report published in 1997. The 2007 report takes the form of 10 recommendations, developed by a panel of 21 world-renowned scientists, on how the general public can reduce their risk of cancer. In order to generate these recommendations a rigorous search of the scientific literature for all studies published about cancer, diet and lifestyle since the 1960s was carried out by nine academic institutions across the world. This search initially identified half a million studies, of which 7,000 were judged to be the most relevant and robust for inclusion in the report.

Continuous Update Project
To ensure that the latest research regarding cancer prevention and survival through diet, weight and physical activity is regularly reviewed, the WCRF developed the Continuous Update Project (CUP) programme. Scientific research from around the world is reviewed systematically and interpreted by a panel of experts, whose conclusions are used to update the Cancer Prevention Recommendations, if necessary.

Since the Continuous Update Project began, 13 new reports have been published, reviewing more recent research on diet, nutrition, physical activity and the prevention of the following cancers:

Research reviewed in these reports has led to changes in the panels judgement on the strength of evidence for some dietary and lifestyle factors and the risk of developing cancer. Below is a summary of the changes since the WCRF 2007 report was published, or see the attached document Continuous Update Project Matrix.

Lifestyle can have a big impact on the risk of developing cancer as it is estimated 42% of cancer cases are linked to lifestyle factors and approximately 600,000 deaths could have been prevented in the last 5 years. Diet is one aspect of lifestyle that plays a role in influencing an individual’s cancer risk and it has a greater influence on some types of cancer than others. The strongest links are with some cancers of the gastrointestinal tract, for example cancers of the mouth, throat, stomach and bowel.

Body fatness
In the UK, being overweight or obese is the second largest preventable cause of cancer. Maintaining a healthy weight throughout life may be one of the most important ways to reduce the risk of developing cancer and can also protect against a number of other common chronic diseases, such as diabetes and cardiovascular disease.
There is strong evidence to suggest that weight gain, overweight and obesity can increase the risk of developing the below cancer types:

Eating a healthy, balanced diet and regular physical activity can help maintain body weight and will help to reduce the risk of developing cancer. The WCRF recommends being as lean as possible within the normal body weight range.

Plant foods
Evidence shows that most diets that are protective against cancer are mainly made up from foods of plant origin. It is estimated that if people ate the recommended amount of fruit, non-starchy vegetables and fibre, 34% of mouth, pharynx and larynx cancer cases could be prevented.

Cereals, roots, tubers and plantains are thought to probably protect against colorectal cancer because they are high in fibre, however the mechanism is not clear.

Fruit which are sources of Vitamin C are thought to reduce the risk of developing cancer. It is suggested Vitamin C can protect against oxidation damage to the cell, can inhibit formation of carcinogens and can protect DNA from mutations.

It is still unclear the reason as to how red meat causes cancer although various mechanisms have been proposed to explain this. Components of cooked meat have been implicated, such as heterocyclic amines (chemicals formed when cooking meat at high temperatures) and polycyclic aromatic hydrocarbons (chemicals formed when meat and fish are cooked over a direct flame such as barbecuing). Another theory is when red meat is eaten nitrosamines are formed which can damage DNA. Some processed meats also have nitrates added, which are converted to nitrosamines in the gut.

Alcohol
There is strong evidence to suggest that alcohol consumption increases the risk of the below cancers;

A few mechanisms have been proposed to understand how alcohol causes cancer.

In colorectum cancer, bacteria in the intestine can oxidise ethanol in colorectal tissue and produces extremely higher levels of acetaldehyde (up to 1000-fold higher) than compared to levels in the blood, and is thought acetaldehyde may be carcinogenic. In breast cancer, evidence has shown alcohol interferes with the oestrogen pathways, which can affect hormone levels and oestrogen receptors.

It is also suggested that people who drink large amounts of alcohol may have diets that are deficient in essential nutrients and can make the tissue more susceptible to carcinogenesis. Finally, the combination of tobacco and alcohol can increase the risk of developing cancer. It is thought that tobacco causes specific mutations in DNA which are less efficiently repaired in the presence alcohol.

In the context of cancer risk, the WCRF recommends not to drink alcohol at all as it is suggested even a small amount of alcohol can increase the risk of developing cancer. It is estimated that 1 in 5 breast cancer cases could be prevented by not drinking alcohol.

Salt
Several studies have reported a link between a high intake of salt and salted foods and increased risk of stomach cancer. Salt may also facilitate H. pylori infection, which is a known risk factor for stomach non-cardia cancer, which is particularly common in Asia.

A high intake of salt can also increase the risk of Hypertension and Cardiovascular Disease. It is recommended by the Scientific Advisory Committee and by Government that we should limit salt consumption to no more than 6g/d, however the mean intake of salt in the UK is 7.6g/d.

Breastfeeding
Breastfeeding is recommended for protection against infections in infancy, some childhood diseases, and also to help with mother and child bonding. The latest scientific evidence also indicates that breastfeeding protects the mother developing breast cancer and may reduce the risk of developing other cancers, such as ovarian cancer.

During lactation, hormone levels are altered because of amenorrhea and infertility. It is suggested this alteration in hormone levels, such as androgens, reduces the risk of cancer.

Cancer survivors
The WCRF also recommends that cancer survivors follow the same advice as individuals aiming for cancer prevention (if able to do so and unless otherwise advised).

Overall, the recommendations for reducing an individual’s risk of cancer indicate the importance of following a healthy, active lifestyle, being mindful of the need to stay physically active and maintaining a healthy bodyweight. It is now recognised that it is better to consider overall dietary pattern rather than singling out particular items to eat more of or avoid. No single food can provide all the essential nutrients that the body needs, and any one food is unlikely to cause harm if eaten in moderate amounts.

For more information on the link between diet and cancer and for the latest research visit the WCRF website.