We aim to give people access to reliable science-based information to support anyone on their journey towards a healthy, sustainable diet. In this section you can read about diet, nutrition and heart health.

The science of cardiovascular disease

Cardiovascular disease is a major cause of early death and disability across the world. The major markers of risk are well known, but such markers do not account for all cardiovascular risk. A new comprehensive Task Force report examines the evidence for emerging and novel risk factors, and their relationship with diet and nutrition. 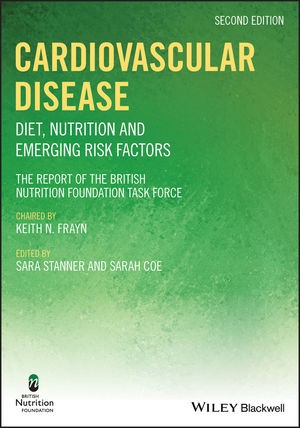 CARDIOVASCULAR DISEASE: Diet, Nutrition and Emerging Risk Factors covers everything from epidemiology to genetic factors, to inflammation and much more – offering invaluable advice on reducing risk factors and preventing CVD.

Who will find it of interest?

CARDIOVASCULAR DISEASE: Diet, Nutrition and Emerging Risk Factors is an important information resource for those working in the field of cardiovascular health or involved in making decisions about health policy. It will be of interest to a broad range of health professionals, the food industry and those who disseminate about the effects of food and health.

How do I get a copy?

The report is available in paperback or as an e-book. Details of how to puchase the report are on Wiley's website here.

Information from our Task Force report is summarised in our 'Helping to protect yourself from heart disease and stroke' chart, available to download below.

Cardiovascular disease (CVD) is a group of disorders of the heart and blood vessels, which includes coronary heart disease, heart attack and stroke. Approximately 26% of all deaths in the UK are due to CVD and 42,000 people die prematurely (under the age of 75) each year as a result of the disease. It is estimated 7 million people in the UK are living with CVD, which costs the NHS £6.8 billion a year. Coronary heart disease (CHD) is the leading cause of death in the UK, with around 1 person dying from CHD every 8 minutes. However, it is believed 80% of CHD and stroke could be prevented by changes to lifestyle factors, such as diet, physical activity and smoking.

Atherosclerosis is the narrowing of the arterial lumen (the space inside the artery), due to a build-up of plaque that consists of muscle cells, connective tissue, cholesterol (primarily low density lipoprotein (LDL) cholesterol) and calcium. The narrowing of the lumen restricts blood flow and if this occurs in the coronary arteries the supply of oxygen to the myocardium (muscular tissue of the heart) is deprived, causing an accumulation of lactic acid and resulting in angina (chest pain). The development of atherosclerosis starts in early life and gradually progresses throughout adolescence and early adulthood. However, the rate of development of atherosclerosis is influenced by CVD risk factors, such as high blood cholesterol and high blood pressure. If an atherosclerotic plaque ruptures or breaks down, a blood clot can form in the vessel (thrombosis) blocking the flow of blood. If this occurs in the coronary arteries it can lead to a heart attack and if the blockage occurs in a blood vessel that supplies the brain it can result in a stroke.

There are a number of factors which can increase or reduce the risk of CVD and the more risk factors a person has, the greater the chance of developing CVD.

Dietary factors and risk of CVD

Fibre
Diets high in fibre are associated with reduced risk of CVD. It is believed one potential mechanism for the benefit on CVD risk is the effect of fermentable fibres from foods like oats and fruit on cholesterol levels. Consumption of these types of fibre can reduce the level of total and LDL cholesterol in the blood because the amount of cholesterol absorbed in the small intestine is reduced. Additionally, as a result of the fermentation of fibre in the colon, specific short chain fatty acids are produced which have been found to inhibit cholesterol synthesis in the liver. In SACN’s 2015 report, Carbohydrates and Health, a 9% reduced risk of CVD was estimated with every 7g of additional fibre intake and an intake of 30g/day for adults was recommended. However, current intakes are well below this recommendation at around 18-19g for adults aged 19-64 years.

Salt
A high intake of salt can increase the risk of hypertension which is a risk factor for CVD. Reducing salt intake can help to lower blood pressure and therefore reduce the risk of developing CVD. It is recommended that consumption of salt should be limited to a maximum of 6g/day, however despite intakes reducing over recent years, the average intake for adults in the UK is 8g/day.

Fish
Oily fish is one of the richest dietary sources of n-3 fatty acids and it is believed its cardioprotective effects are due to the high content of the long chain polyunsaturated fatty acids DHA and EPA. Additionally, consuming fish may displace other foods such as red meat, which is typically higher in saturated fat, from the diet. Current UK recommendations are to consume 2  x 140g portions of fish per week, one of which should be oily, which would provide approximately 450mg long chain n-3 fatty acids/day, depending on which fish are chosen. Fish intakes tend to increase with age, with older adults consuming the highest amount in the UK. However, average intakes in all age groups are below recommendations. Older adults consume the most oily fish, with average intakes of 12-13g/day while children between the ages of 1.5 and 10 years consume the least. Overall, average population intakes in adults in the UK are 8g/day.

Alcohol
Previously, moderate alcohol consumption was thought to be associated with a reduction in CVD mortality, however a large body of evidence suggests the potential positive effects of moderate consumption were overestimated. Current advice that both men and women should not drink more than 14 units of alcohol per week is based on keeping health risks at a low level and a safe limit has not been set.

Dietary patterns and risk of CVD

In general a Mediterranean style diet contains moderate amounts of fat which is mostly unsaturated and is high in fibre and phytochemicals. It is believed potential mechanisms for the beneficial effect this dietary pattern has on CVD include anti-inflammatory effects and improvements in endothelial function. Additionally, the Mediterranean diet has been found to have beneficial effects on risk factors for CVD, such as obesity, waist circumference, diabetes and hypertension.

Milk and dairy products and risk of CVD
In more recent years, research has started to explore associations between dairy consumption and risk of developing CVD. As discussed on page 4, intake of saturated fatty acids increases the levels of LDL cholesterol in the blood, which is a risk factor for CVD. Dietary advice for the prevention of CVD has therefore focused on reducing intakes of saturated fatty acids. Among UK adults, milk and dairy products are one of the main dietary sources of saturated fatty acids in the diet, along with cereals and cereal products and meat and meat products. However, evidence from prospective cohort studies and meta-analyses have suggested milk and dairy products (excluding butter and cream) may not have a negative effect on the development of CVD and in some cases may reduce the risk of CVD. Although the mechanism is not clear, other components within the food matrices of milk and dairy products (such as minerals [e.g. calcium, potassium and magnesium] and bioactive peptides) may potentially have beneficial effects on risk factors for CVD including reducing blood pressure, arterial stiffness (a risk factor for atherosclerosis) and reducing lipid absorption.

Answers to common questions about cardiovascular disease from our Task Force report.

A resource looking at the link between diet and heart disease risk.