The holy month of Ramadan is the ninth month of the Islamic calendar and a time when many Muslims across the world fast during daylight hours for 29-30 days. The Islamic calendar is lunar and so Ramadan falls at a slightly earlier time in the year each year.

Muslims taking part in Ramadan do not eat or drink anything during daylight hours, eating one meal (the ‘suhoor’ or ‘sehri’) just before dawn and another (the ‘iftar’) after sunset. The end of Ramadan is marked by ‘Eid-ul-Fitr’, the Festival of the Breaking of the Fast. A special celebratory meal is eaten during the festival, the first daytime meal for a month.

Ramadan 2021 is expected to start around the 12th of April. COVID-19 restrictions mean that, like Ramadan 2020, Muslims will mainly be celebrating Ramadan at home and traditional gatherings for the evening meal won't be able to go ahead. For those who celebrate the month this may mean planning differently for foods and drinks to prepare as well as possibly taking part in online events to meet family, friends and the wider community. Ramadan is a time where it is very important to try to help others. Although doing this face to face isn't possible, supporting those in need in other ways, such as donating to charities online, is still an key part of the month.

While fasting is obligatory for all healthy Muslims (not children), there are exemptions for those who are ill or who's health could be affected by fasting, for example, pregnant or breastfeeding women and people with diabetes (see below).

Traditional Ramadan foods from around the world

BNF blog: to fast or not to fast - Ramadan and diabetes 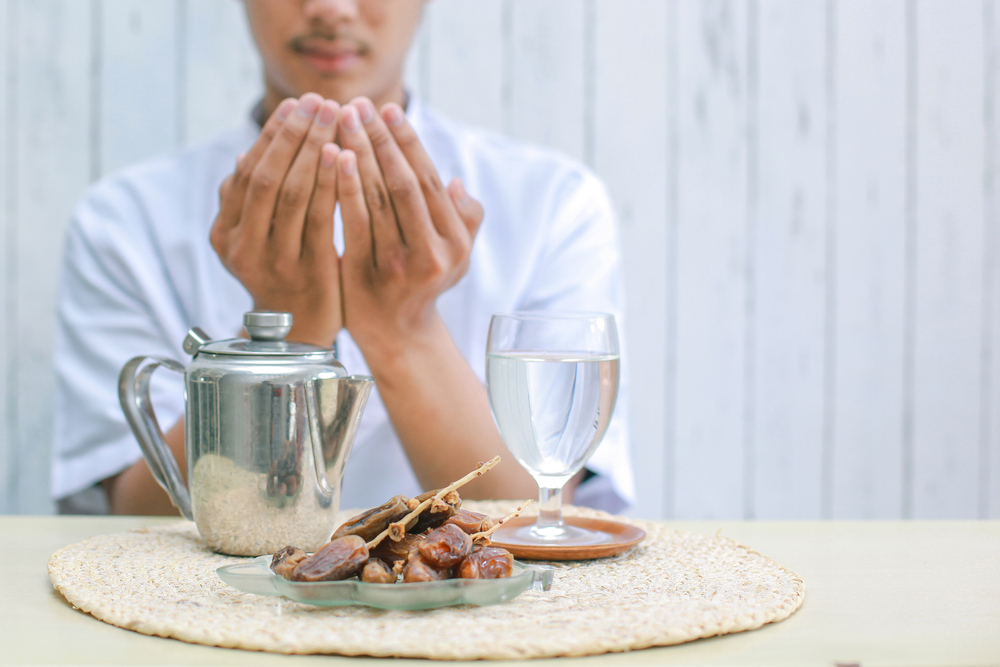 How does fasting affect the body?

During fasting hours when no food or drink is consumed, the body uses its stores of carbohydrate (stored in the liver and muscles) and fat to provide energy once all the calories from the foods consumed during the night have been used up. The body cannot store water and so the kidneys conserve as much water as possible by reducing the amount lost in urine. However, the body cannot avoid losing some water when you go to the toilet, through your skin and when you breathe and when you sweat if it is warm.

Depending on the weather and the length of the fast, most people who fast during Ramadan will experience mild dehydration, which may cause headaches, tiredness and difficulty concentrating. However, studies have suggested that this is not harmful to health, provided that enough fluids are consumed after breaking the fast to replace those lost during the day. However, if you are unable to stand up due to dizziness, or you are disoriented, you should urgently drink regular, moderate quantities of water – ideally with sugar and salt – a sugary drink or rehydration solution. If you faint due to dehydration, your legs should be raised above your head by others, and when you awake, you should urgently rehydrate as outlined above.

Once the fast is broken, the body can rehydrate and gain energy from the foods and drinks consumed. Having not eaten for a long period, you may find it helpful to eat slowly when breaking the fast and to start with plenty of fluids and low-fat, fluid-rich foods (see suggestions below).

Drinking plenty of fluids, as well as consuming fluid-rich foods, such as fruit, vegetables, yogurt, soups and stews, is very important to replace fluids lost during the day and to start the next day of fasting well hydrated. Salt stimulates thirst and so it’s a good idea to avoid consuming a lot of salty foods. The pre-dawn meal, suhoor, provides fluids and energy for the day of fasting ahead, so making healthy choices can help you to cope better with the fast (see suggestions below).

While iftar meals are often a time for celebration, with families and friends coming together to break their fasts, it’s important not to go overboard when eating during Ramadan. Consuming a lot of deep fried, creamy and sweet foods may actually cause you to gain weight during Ramadan. Ramadan can be a good time to make changes to improve the balance of your diet that you can sustain in the longer term. For more on a healthy diet click here.

The changes to eating habits and lack of fluids during the day may cause constipation for some people. When you can eat and drink, consuming plenty of high fibre foods, such as wholegrains, high fibre cereals, bran, fruit and vegetables, beans, lentils, dried fruit and nuts alongside plenty of fluids may help to ease constipation as well as doing some light physical activity, such as going for a walk after iftar.

Is fasting good for health?

Results from studies on the health effects of Ramadan fasting are mixed, probably because the length of the fast and the weather conditions experienced vary depending on the time of year and the country where the fast is being observed. Some studies have found that people who are overweight or obese lose weight and body fat during Ramadan (although they tended to put this weight back on after Ramadan). If you are overweight and would like to lose weight and keep it off, then making plans to maintain a healthy diet and get active when Ramadan is finished may help you sustain any weight lost due to fasting.

Some small studies have looked at the effect of Ramadan fasting on factors like blood cholesterol and triglycerides (fat in the blood) and found a short term improvement in some cases although some studies found no effect. There have also been some small studies that suggest that Ramadan fasting may have a short term beneficial effect on the immune system. In both cases, the results of studies have been mixed and so more research is needed to confirm these results. 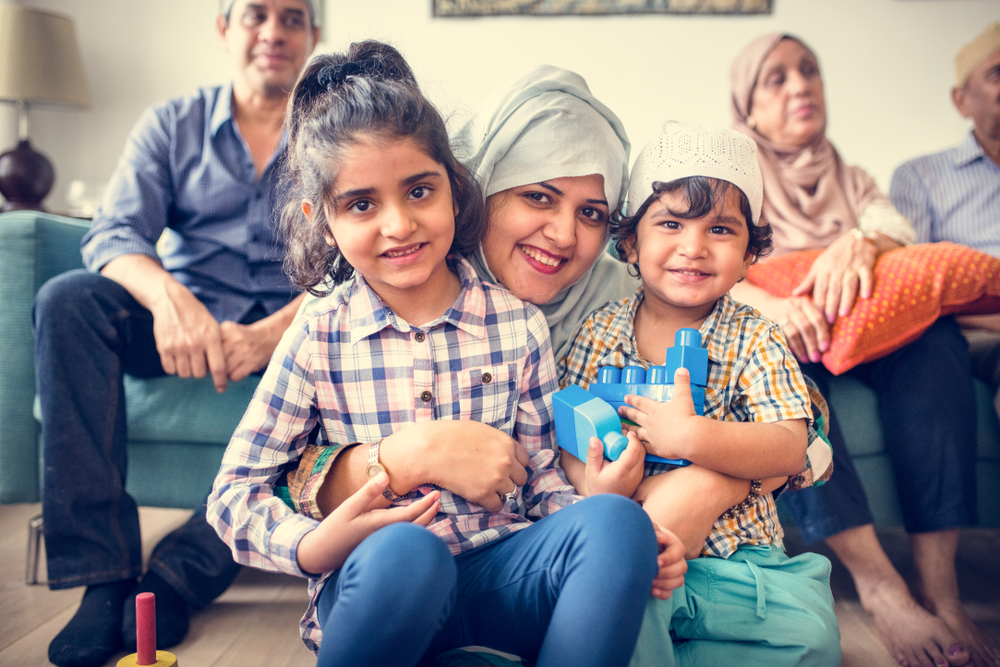 What to eat and drink at iftar and suhoor

Iftar – when first breaking the fast go for plenty of fluids, low fat, fluid-rich foods and foods containing some natural sugars for energy (avoid consuming a lot of foods or drinks with added sugars). Below are some examples:

After breaking the fast – meals vary between different cultures and traditions but try to make sure the foods you eat provide a balance of starchy foods, including wholegrains where you can, fruit and vegetables, dairy foods and protein-rich foods like meat, fish, eggs and beans, as shown by the Eatwell Guide. For example you could have a range of curries including fish, meat, vegetables and pulses, served with rice, chapattis and yogurt, and this would include all of the key food groups within the Eatwell Guide.

After a long fast it’s natural to want to treat yourself but try to keep the amount of fatty and sugary foods and sugary drinks you have to a small amount. Remember that you only have a relatively short time each day to eat and drink to provide your body with all the essential nutrients and fluids it needs to be healthy, so the quality of your diet is especially important during Ramadan.

If you can, once you have had a chance to digest your food, you could try doing some light exercise such as going for a walk. If you attend Taraweeh prayers (special night-time prayers for Ramadan) in the evening, perhaps you could walk all or part of the way there.

Suhoor – drink plenty of fluids, choose fluid-rich foods to make sure you are well hydrated for the day ahead and go for starchy foods for energy, choosing high fibre or wholegrain varieties where possible as these can help keep you feeling fuller and can aid digestion, helping to prevent constipation. Below are some examples:

Much research has been done on the health implications of fasting for people with both type 1 and type 2 diabetes. Type 2 diabetes tends to be particularly prevalent in people of south-Asian and black African descent, many of whom may be Muslim. There can be a risk of dehydration and hypoglycaemia, for those with diabetes who observe the fast, especially in the spring and summer when days are longer and warmer.

It is permissible in Islam for those with a health condition such as diabetes not to fast. However, Ramadan fasting has great spiritual significance for Muslims and many with diabetes do choose to fast. Whether to fast or not is a personal decision for each individual. If you are diabetic and are planning to fast it’s advisable to visit your doctor or healthcare team to talk about how to manage your condition while fasting.

For more information you may find the following links useful:

Guidelines for health professionals from the International Diabetes Federation

Traditional Ramadan foods from around the world

Below are some examples of foods eaten in different Muslim countries during Ramadan:

With thanks to Nabil, Fadila, Rifat and Nashwa for information about traditional foods and drinks during Ramadan.

For more information on the sources used in this text, please contact postbox@nutrition.org.uk

A resource about following a healthy Ramadan.

A resource about following a healthy Ramadan.