Find out more about how to plan a healthy vegetarian or vegan diet.

Healthy eating for vegetarians and vegans

What is a vegetarian diet?

A vegetarian is usually described as someone who does not eat meat, poultry, fish, shellfish or any by-products of slaughter.

However there is no single, accepted definition of ‘vegetarian’. People may define themselves as vegetarians because they largely choose plant based diets, will include some fish (pescetarian), or are what has been popularly described as flexitarian or ‘semi-vegetarian’ (someone who is mostly vegetarian but occasionally eats meat or poultry).

Some of the common types of vegetarians are:

How many people in the UK are vegetarian?

From recent dietary surveys (National Diet and Nutrition Survey 2008/2009-2011/2012) we can estimate that around 2% of adults and children living in the UK are vegetarian. This equates to more than 1.2 million people. In the survey, less than 1% reported following a vegan diet.

Why do people choose to follow a vegetarian diet?

There are many reasons why people choose to be vegetarian including parental preferences, health reasons, religious or cultural beliefs as well as concern for animal rights and the environment.

A healthy and balanced vegetarian diet

Appropriately planned vegetarian diets are nutritionally adequate across all life stages of the life cycle and can provide the nutrients we need.

For more information on vegetarian and vegan diets during pregnancy read our page on this topic.

Do remember that vegetarian options can also be high in saturated fat, salt and sugar. Eating plenty of fruit and vegetables, reducing your salt and free sugars intake, keeping your alcohol consumption within government guidelines, maintaining a healthy bodyweight and leading an active lifestyle are all important.

The Eatwell Guide is the UK dietary recommendations and applies to vegetarians and vegans; you can use it to help you make good choices for a balanced and varied diet.

Suitable choices for vegetarians and vegans

*The full name of this group within the Eatwell Guide is 'Beans, pulses, fish, eggs, meat and other proteins'. The reference to meat and fish was removed on the basis that these are not suitable for vegetarian or vegan diets. 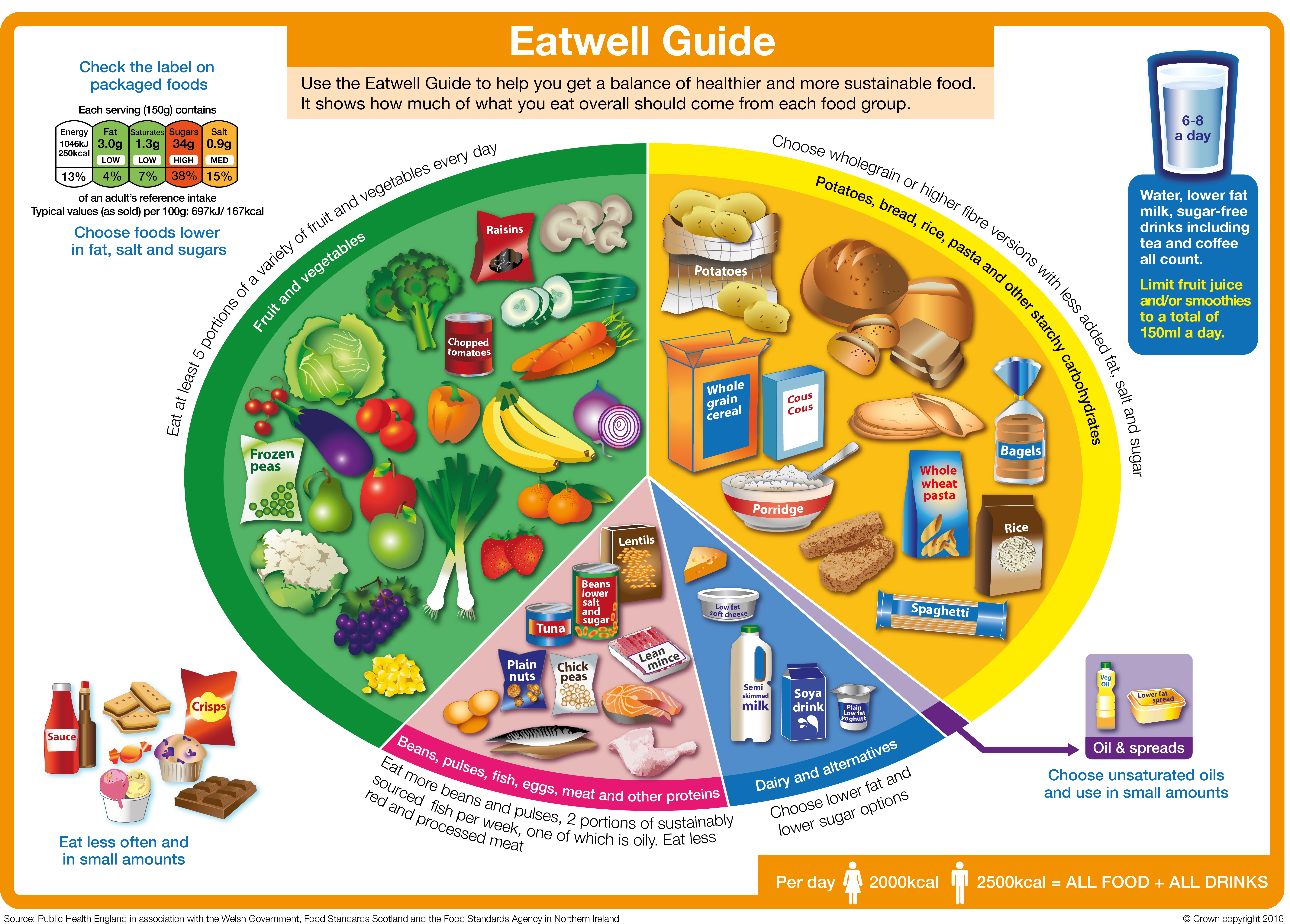 Foods to eat less often and in small amounts

The Eatwell Guide puts foods into distinct groups. However, we mostly eat dishes and meals like curries, stews and sandwiches which are made of foods from multiple groups - these are called ‘composite dishes’.

Here is an example of a vegan and vegetarian composite dish showing how the main ingredients fit with the food groups of the Eatwell Guide.

You could also add a raita made with plain soy yogurt (dairy and alternative group), just add some finely chopped cucumber and a good pinch of cumin. 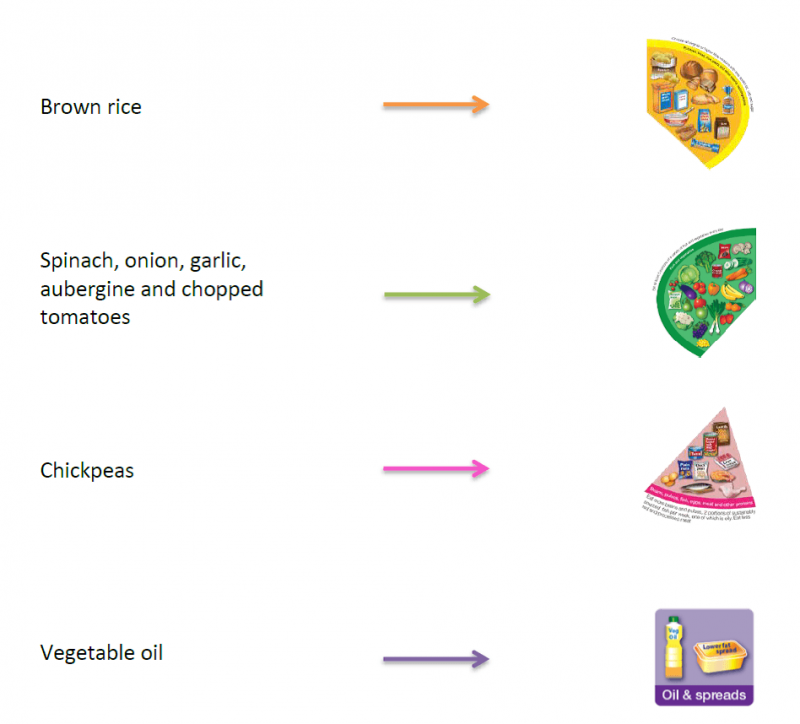 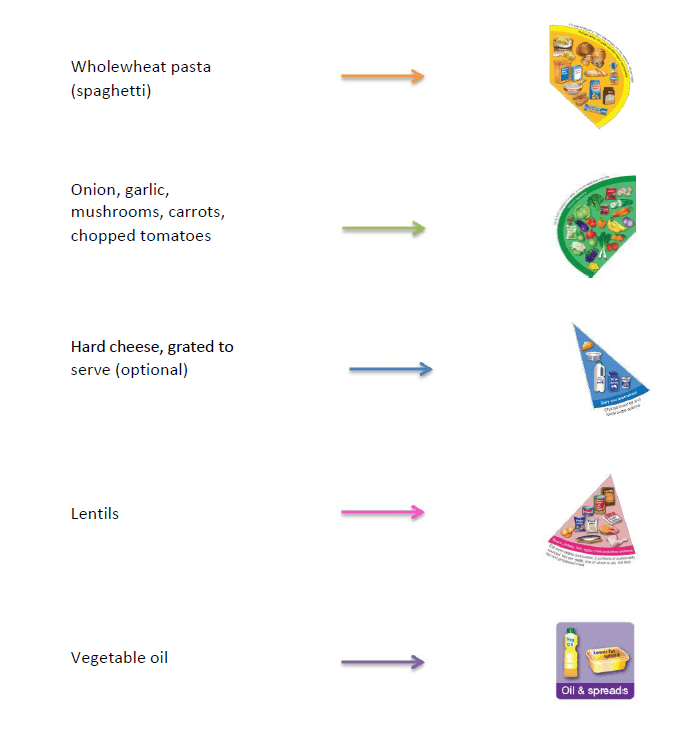 Some important nutrients to consider

A well-planned vegetarian or vegan diet can provide the nutrients we need. However, some nutrients may come from different sources. For example over a third of calcium in the average UK diet comes from milk and dairy foods but in vegans calcium will be obtained from non-dairy foods and drinks.

In the next section we will look at:

Proteins are needed for many of the important functions that make our body work properly. A common misconception is that those who do not eat any meat or fish will not consume enough protein. However, vegans and vegetarians typically do get enough protein from their diet.

Proteins are made up of substances called amino acids. Our bodies can make some of these amino acids, but others known as ‘essential’ amino acids, are needed from the diet.

Consuming a range of plant protein sources will help ensure you are getting enough of all the essential amino acids.

Although not considered in the ‘protein’ food group, cheese is often a popular choice for people following vegetarian diets. Cheese is a good source of protein, calcium and other nutrients. However some varieties can be high in saturated fat and salt. Check the label and try and choose reduced fat varieties or use stronger varieties in smaller amounts.

Iron is essential for transporting oxygen around the body, brain function and the immune system. According to dietary surveys, 46% of girls aged 11 to 18 years and 23% of women aged 19 to 64 years have inadequate intakes of iron.

Females who are pre-menopausal (those who have a monthly cycle) are more at risk of iron deficiency.

The iron found in plant foods (called non-haem iron) is less readily absorbed in the body than the iron from animal sources (known as haem iron). Vegetarians may have lower iron stores so it is important to include good sources of iron in the diet.

Good sources of iron for vegetarians

Vitamin C helps your body absorb iron. Try and add some vitamin C rich vegetables to your meal. For example if you are making a vegetarian bean curry, add some peppers. You could also have a small glass of fruit juice with your meal (remember the dietary recommendation is a maximum of 150ml per day!)

Some compounds in tea and coffee can actually make it harder to absorb iron, so try and avoid these when consuming plant sources of iron (such as pulses, kidney beans and chickpeas).

Calcium is important for healthy bones and teeth as well as the functions of muscles and nerves. For vegetarians, dairy foods, such as milk, cheese and yogurt, are a good source of calcium. Try to select lower fat, lower sugar versions where possible.

If you do not eat dairy products, make sure you include other calcium-containing foods and drinks which include:

Vitamin B12 is needed for healthy blood as well as our nervous system and immune system.

Typically, vitamin B12 is only found naturally in foods from animal sources. So vegetarians who consume dairy products and eggs can get enough vitamin B12 from their diet; however vegans may not get enough of this vitamin, due to the lack of reliable sources. Studies have confirmed low vitamin B12 intake and blood concentrations (the level of vitamin B12 in the blood) in both vegans and vegetarians. Clinical symptoms from vitamin B12 deficiency because of poor dietary intake are rare; however cases have been reported in strict vegan diets, particularly in young children.

Vegan sources of vitamin B12

Remember to look at food labels!

Alternatively, as suggested by the Vegan Society, you could take a vitamin B12 supplement. Do not take more than the recommended amount. You can always talk to a health professional if you are unsure.

Omega-3 fats are essential to our health. Long-chain omega-3 fats like docosahexaenoic acid (DHA), the kind that you find in oily fish, may help lower our risk of heart disease, and contribute to normal visual and brain development. Oily fish such as salmon, mackerel and trout are rich sources of these long-chain omega-3 fats.

If you do not eat fish, you can get omega-3 fats from other foods (see list below). However, these are short-chain omega-3 fats known as α-linolenic acid (ALA). It has been shown that only a small proportion of these fats can be converted into long-chain omega-3s.

Foods containing short-chain omega-3 fats (ALA) include some nuts, seeds and their oils

Sources of iodine include fish, eggs, milk and milk products, with dairy contributing around one third to average daily UK iodine adult intake. Vegetarians and particularly vegans are at risk of iodine deficiency as they do not eat rich iodine sources (fish and/or dairy products). Soya and dairy alternative drinks are not typically fortified with iodine (check label) and therefore sources are limited.

Vegan sources of iodine include:

Selenium is needed for the normal function of the immune system and to help protect your body’s cells. Dietary surveys show that a substantial proportion of the population may not have an adequate intake of selenium. However the health implications of this are currently unclear. Meat and fish are really good sources of selenium, and eggs are also a good source. If you're a vegetarian or vegan, it's important to make sure you're eating other foods which contain a source of selenium (although the actual levels are variable dependent on the soil in which they are grown), these include:

Vitamin D is needed for the absorption of calcium and phosphorus from foods to keep bones healthy. We get most of our vitamin D through the action of sunlight on our skin during the summers months but oily fish and eggs, fortified cereals and spreads also contain vitamin D.

In addition to sunlight, good vegan sources of vitamin D are:

When choosing vitamin D supplements, read the label to ensure they are suitable for vegans. Vitamin D2 and vitamin D3 from lichen are vegan-friendly options.

Association of vegetarian diets and health

It is important to remember that removing meat from your diet alone is no guarantee of a healthier diet. However, there is some evidence that shows vegetarian dietary patterns may have a health benefit when compared to more traditional dietary patterns. Vegetarian or more plant-based diets are typically higher in fruit and vegetables, whole grains and dietary fibre while being lower in saturated fat, sweets and non-water beverages (such as sugar-sweetened beverages and alcohol).

However, we also know that people who adopt vegetarian diets are often more health conscious overall and also adopt other healthier lifestyle factors. For instance, vegetarians are likely to be more physically active, less likely to smoke, consume less alcohol and are more likely to have a higher income and education. This may explain some of the observed health benefits.

Systematic reviews have found associations between the consumption of vegetarian diets and a reduced incidence of obesity and coronary heart disease, as well as a reduced blood pressure and blood cholesterol, and a lower energy intake.

Studies looking at the association between vegetarian diets and the risk of cancer are somewhat inconsistent.

Cancer is a complex disease and the risk of developing cancer depends on a combination of factors, some of which you cannot change like your genes. Cancer Research UK have said 4 in 10 cancers can be prevented by adopting healthy lifestyle behaviours such as not smoking, eating a healthy, varied diet, keeping active, maintaining a healthy bodyweight and not drinking alcohol or reducing alcohol consumption to within government recommendations.

For more information read our page on reducing the risk of cancer.

We also know that there is not a ‘one size fits all’ healthy diet, but that certain characteristics of dietary patterns are linked with better health. Such dietary patterns include higher consumption of fruit and vegetables, wholegrains, pulses, nuts and seeds as well as lower intakes of fatty/processed meat, refined grains, sugar-sweetened foods and beverages, salt and saturated fat.

For anybody interested in vegan diets and nutrition, the British Nutrition Foundation answers some of the most common questions. This is not a comprehensive guide to a vegan diet, but provides some useful nutrition information in this area.

A FAQ resource about following a vegan diet.