Eat an enjoyable and varied diet

In this article you can find out how to aim for a healthy and varied diet, which is also enjoyable. This includes information on how to:

Variety is the spice of life, as they say, and this applies to what we eat too!

We should try and eat a varied diet to ensure we get enough of all the essential vitamins and minerals we need.  Try to avoid eating the same things every day.

Our sense of taste and smell can change as we age, which can affect our appetite and how much we like food. Make foods as tempting and tasty as possible so that eating stays enjoyable. Keep meals from becoming bland and uninteresting by varying colours and textures as much as possible. Try adding herbs and spices such as mint, rosemary, cinnamon or paprika.

As we age, it is also common to become less interested in food. You may find that you are less hungry than you used to be, so it can be harder to get all the nutrients needed for good health.

Eat plenty of fruit and vegetables

Fruit and vegetables contain many vitamins and minerals essential for good health, as well as phytochemicals (substances made by the plants such as polyphenols) that may have health benefits. They are also generally low in fat and high in fibre. Many studies have shown that people who consume diets high in fruit and vegetables have a lower risk of heart disease, stroke, diabetes and some forms of cancer. 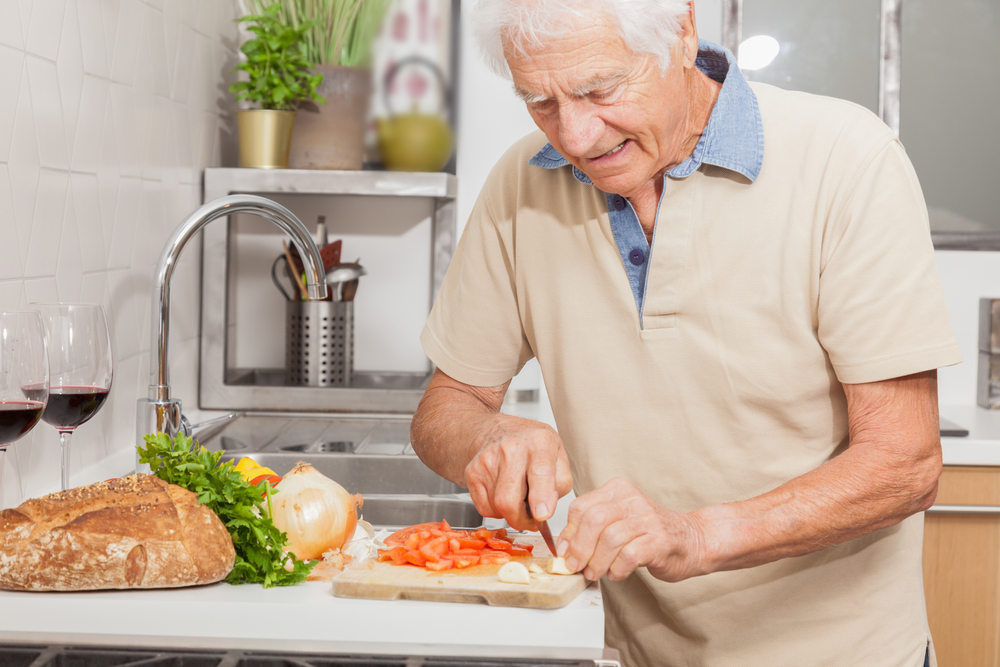 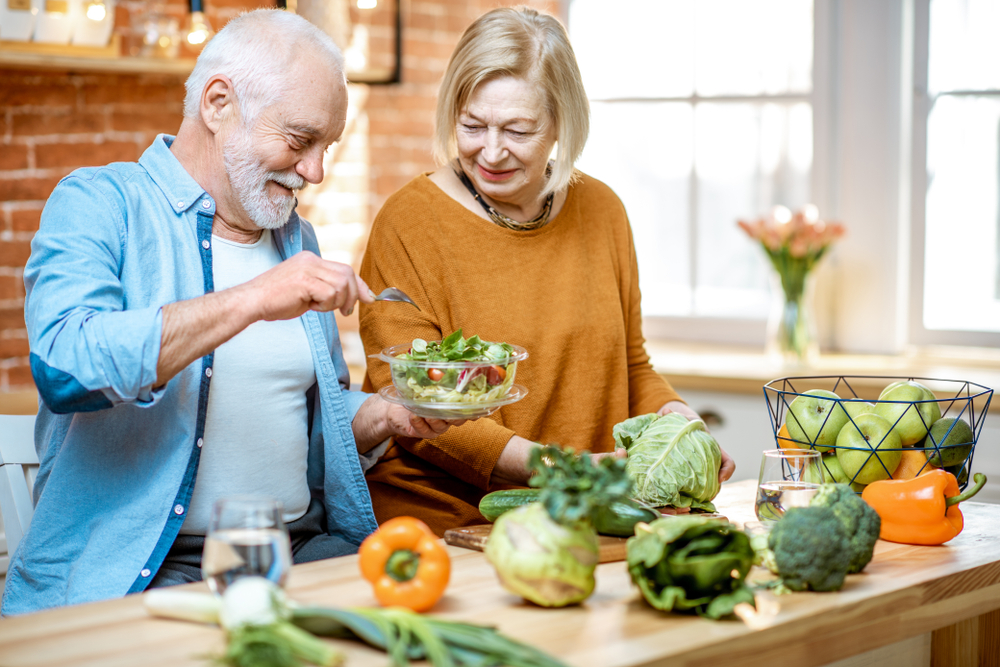 For dried fruit, a portion is 30g, for example 3 dried apricots or 1 tablespoon of raisins. These should be eaten at mealtimes rather than as a snack to reduce the risk of tooth decay.

A glass of 150mls of fruit juice counts as a maximum of one portion per day. For more information on what counts click here. Choose as wide a variety as possible and if you are opting for fresh produce go for those in season as they are often cheaper and may be more sustainable.

Did you know one portion (80g) of beans and pulses, such as kidney beans, chickpeas, lentils and baked beans, can also count towards your 5-A-Day target

There are two basic kinds of fat: saturated and unsaturated. Eating a diet rich in saturated fat can raise your blood cholesterol level and increase your risk of heart disease. So eating less is important for heart health.

Butter, lard, ghee, palm oil and coconut oil contain a high proportion of saturated fat. Other foods with a relatively high saturated fat content include cakes, chocolate, biscuits, pies and pastries. The white fat you see on red meat and underneath poultry skin is also high in saturated fat.

Where possible, cut back on saturated fat and opt for small amounts of foods containing unsaturated fats instead. 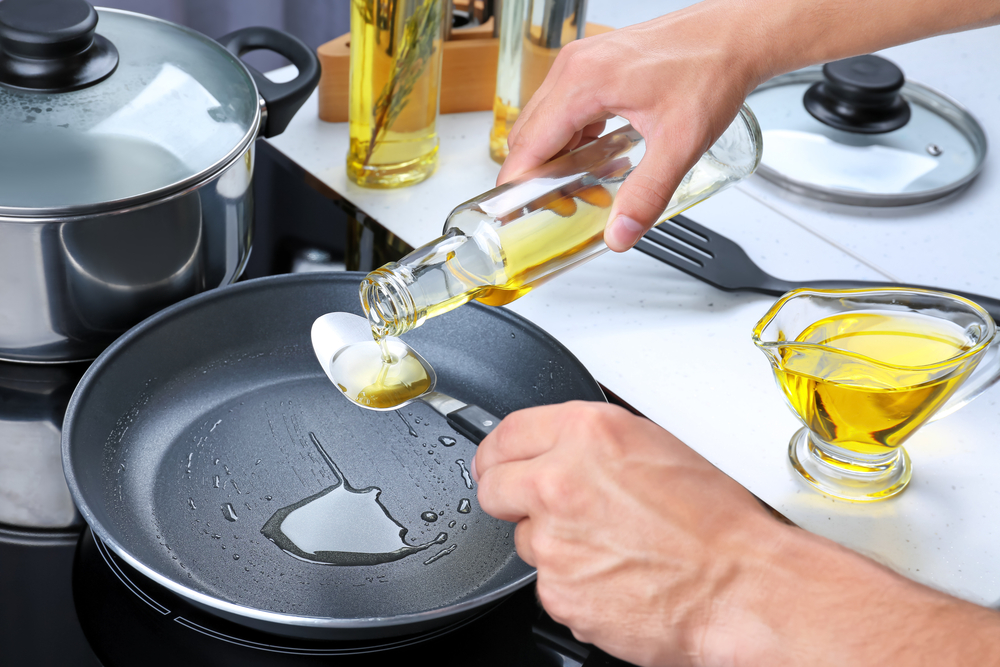 It’s easy to make small changes to cut back on saturated fat. Here’s some examples of simple swaps you can make to reduce the amount of saturated fat you consume:

Include oily fish in your diet

All fish and shellfish provide us with a range of vitamins and minerals, but oily fish, such as herring, salmon and mackerel, are rich in omega-3 fatty acids which may help protect against heart disease. For this reason, we are advised to eat at least two portions (140g cooked weight) of fish a week, one of which should be oily fish.

There is currently a lot of interest in the role of these fatty acids on many other age-related conditions. For example, some research suggests they may help to alleviate some of the symptoms of rheumatoid arthritis. But because oily fish can contain contaminants you shouldn’t eat more than 4 portions per week (or one portion of swordfish as this may be high in mercury). 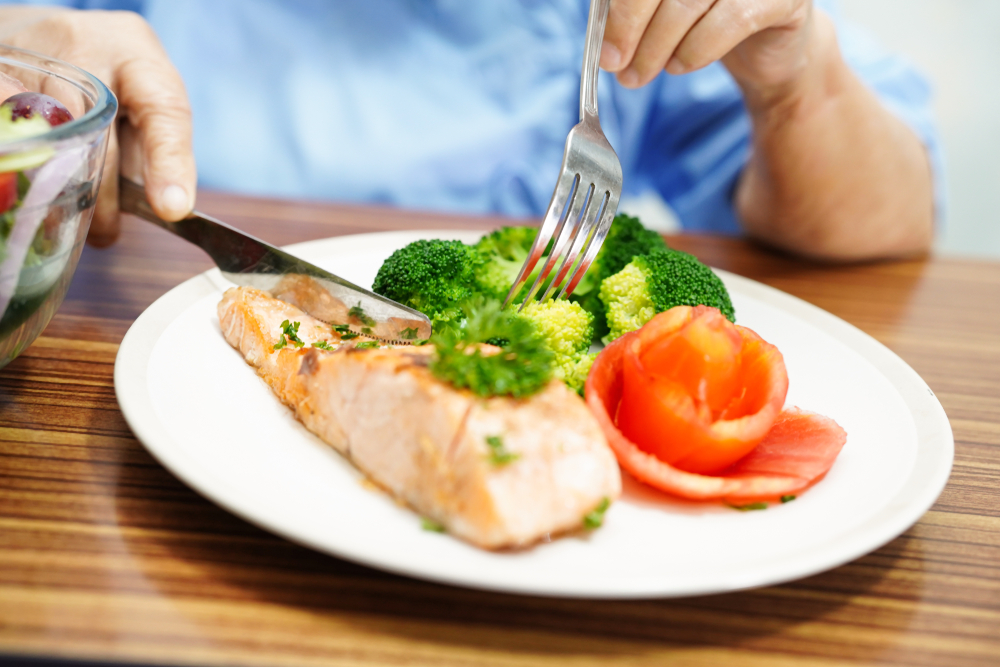 High fibre foods may help you to stay fuller for longer so can be useful if you are watching your weight. It is also important to drink enough fluids or water when eating a diet high in fibre. 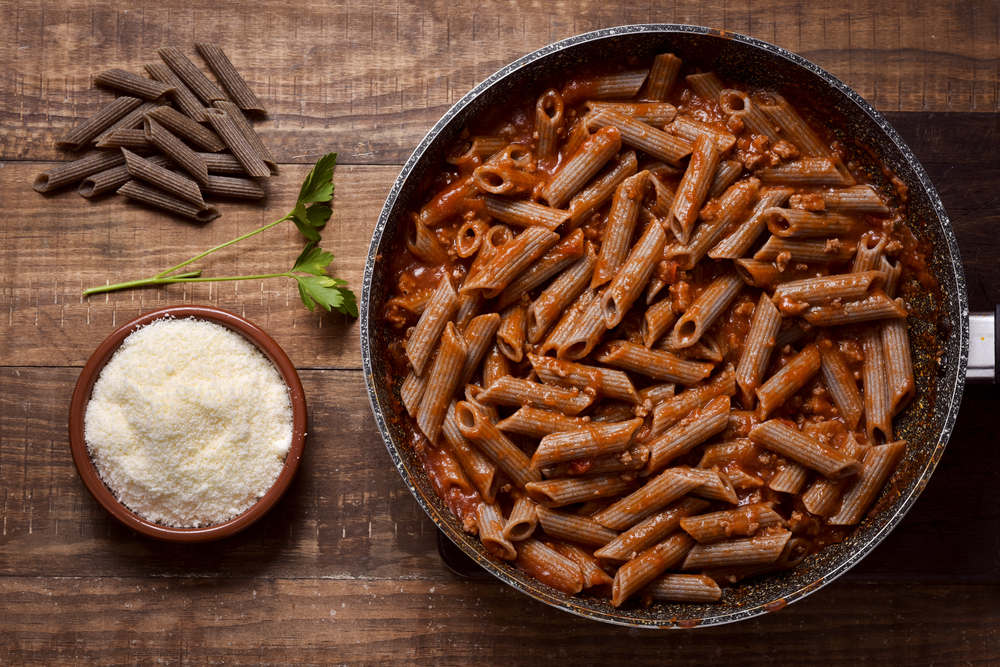 For a number of reasons, older people are at greater risk of dehydration than younger people.

Ageing produces a decrease in our thirst sensation so it is easy for dehydration to go unnoticed. So as we age, it is especially important to drink plenty of water and other non-alcoholic beverages.

Early signs of dehydration include dizziness, tiredness and headaches. Long-term mild dehydration increases the risk of kidney stones, constipation and cholesterol problems, as well as diminished physical and mental performance.

Eight to ten drinks are recommended each day to replace fluid that is lost from the body. Water is a great choice but tea, coffee and fruit juice all count. You will need to drink more if the weather is hot or humid or if you are physically active.

It is really important not to restrict your fluid intake. If getting up during the night is an issue, you may like to consume more of your fluid earlier in the day. 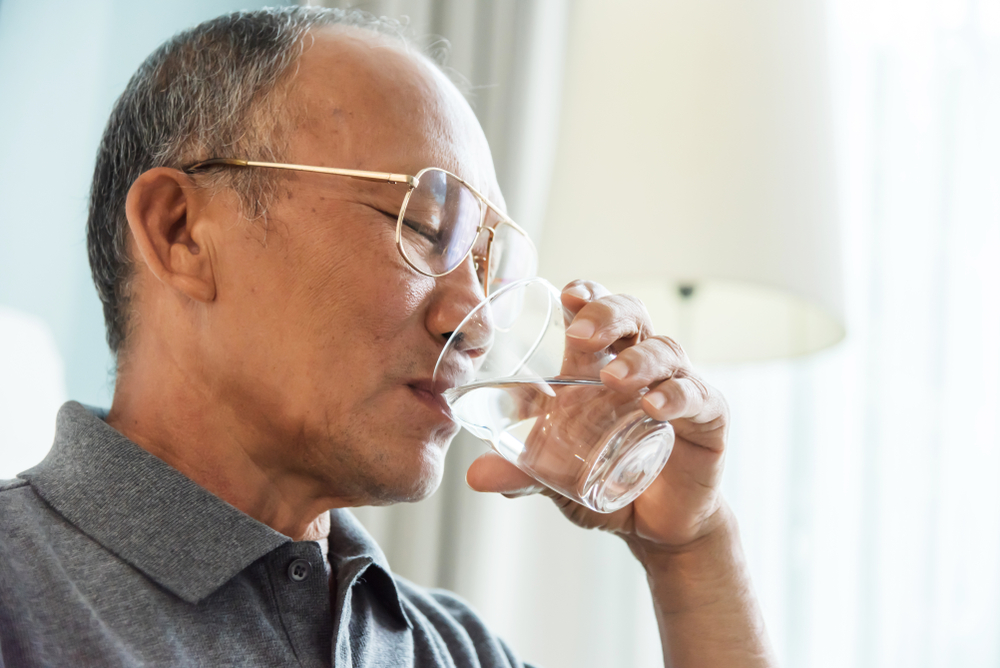 The resources below provide information on healthy snacking, hydration and nutrition for older adults:

A fact sheet looking at some examples of healthy snacking for adults.

A resource about nutrition and immunity for older adults.