This article has information about important nutrients to think about for healthy ageing and advice on supplements.

This article has information about important nutrients to think about for healthy ageing and advice on supplements, including:

Salt (sodium chloride) is the main source of sodium in our diet. While some sodium in the diet is necessary for health, it can raise blood pressure (raised blood pressure is a major risk factor for stroke and heart disease). Adults should eat less than 6g of salt per day. The food industry is reducing the amount of salt in many foods, but a lot of the salt we eat is already added to the foods we buy, and it is important to look at the labels to select lower salt options. For more information read our page on looking at labels.

A decreasing sense of taste as we age can encourage us to add more salt to meals for flavour. Watch the amount you add at the table, and try to use herbs, spices and a variety of different foods to flavour meals instead of adding salt.

Reducing salt in the diet can be easy. It just involves making a few small changes to the foods you choose and the methods you use to cook them. Try these ideas:

Sea salt has as much sodium as table salt. It does not matter how expensive salt is, where it is from, or whether it comes in grains, crystals or flakes - it still has sodium. It's the sodium in salt that can raise your blood pressure and increase your risk of suffering from heart disease. 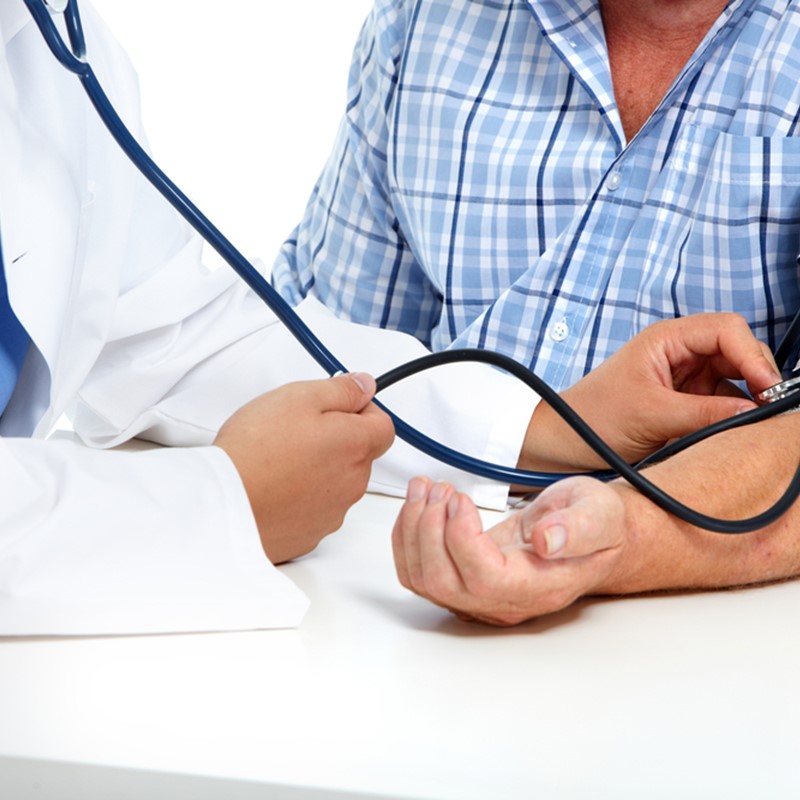 Calcium is important for the development and maintenance of bones. We lose bone mass as we age, so it is important that we consume plenty of calcium. After the menopause, women are at a higher risk of osteoporosis (thinning of the bones) and reduced bone density. This is because the hormone oestrogen has a protective effect over bone breakdown and after the menopause, less oestrogen is produced.

As a result, it is particularly important that older women get plenty of calcium from their diet to minimise bone loss. Milk, cheese and yogurt are rich in calcium, but other sources include fish with edible bones (such as salmon, sardines), some green leafy vegetables like kale, calcium fortified soy products (such as soya drink, tofu), white bread and fortified breakfast cereals. You should be able to get all the calcium you need from your diet, but if you do take calcium supplements, be careful not to take too much – stick to less than 1500mg per day. 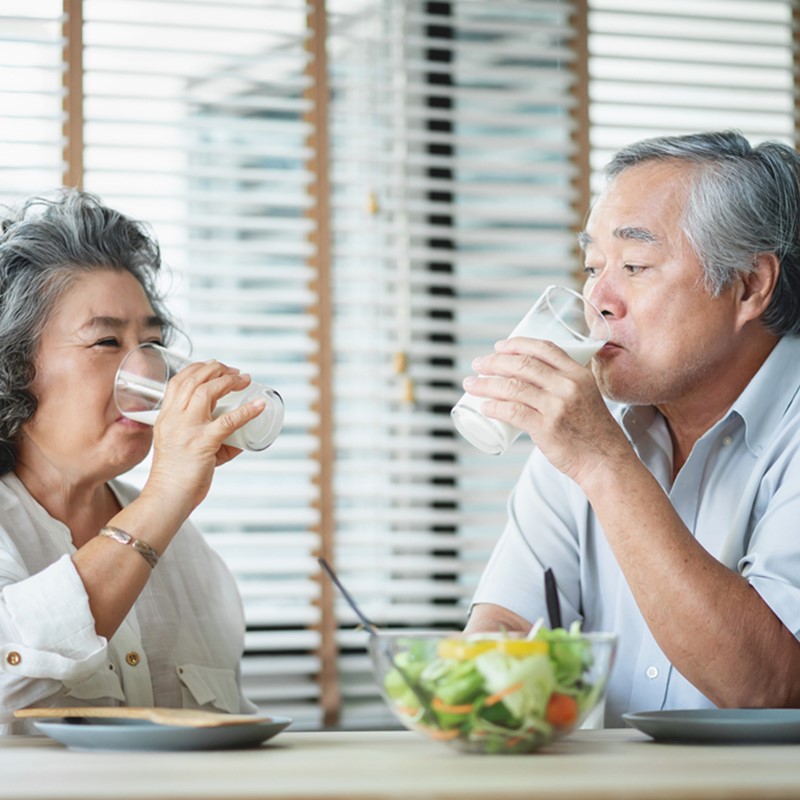 B vitamins have a range of important functions in the body, including contributing to healthy red blood cells, releasing energy from the foods we eat, normal nerve function and vision, healthy skin, and reducing tiredness.

Sources of B vitamins in the diet include: 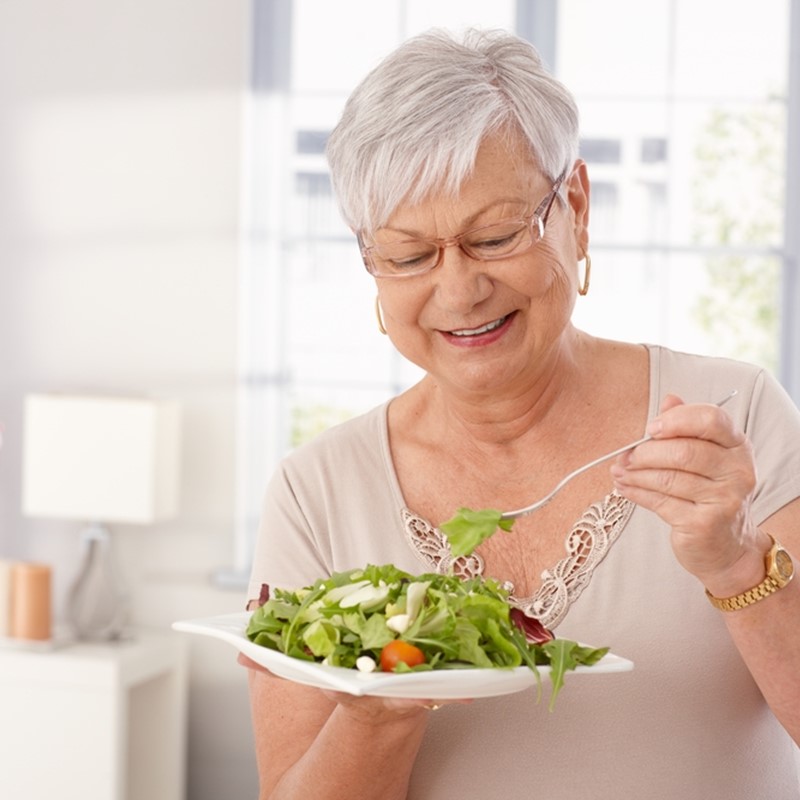 The Department of Health and Social Care recommends that to protect bone and muscle health, all adults including people aged 65 years and over should take a supplement containing 10µg (micrograms) of vitamin D during the autumn and winter months (between October and March), or throughout the year if at risk of not getting enough vitamin D (for example if living in a care home, housebound or wear clothes that cover most of the skin while outside).

Vitamin D supplements are recommended during the autumn and winter months as we cannot make enough vitamin D in our skin naturally through the action of sunlight. It can be difficult for us to get enough vitamin D from our diet alone because it is only found in a limited number of foods including oily fish, eggs, and vitamin D fortified foods such as some breakfast cereals, fat spreads and dairy products.

If you have dark skin, for example if you have an African, African-Caribbean or south Asian background, then you should consider taking a daily supplement containing 10µg of vitamin D throughout the year.

Vitamin D plays a key role in bone health (it is needed by the body to absorb calcium) and muscle function. Because vitamin D is needed for increased bone and muscle strength, low levels of vitamin D can increase the risk of falls and fracture. 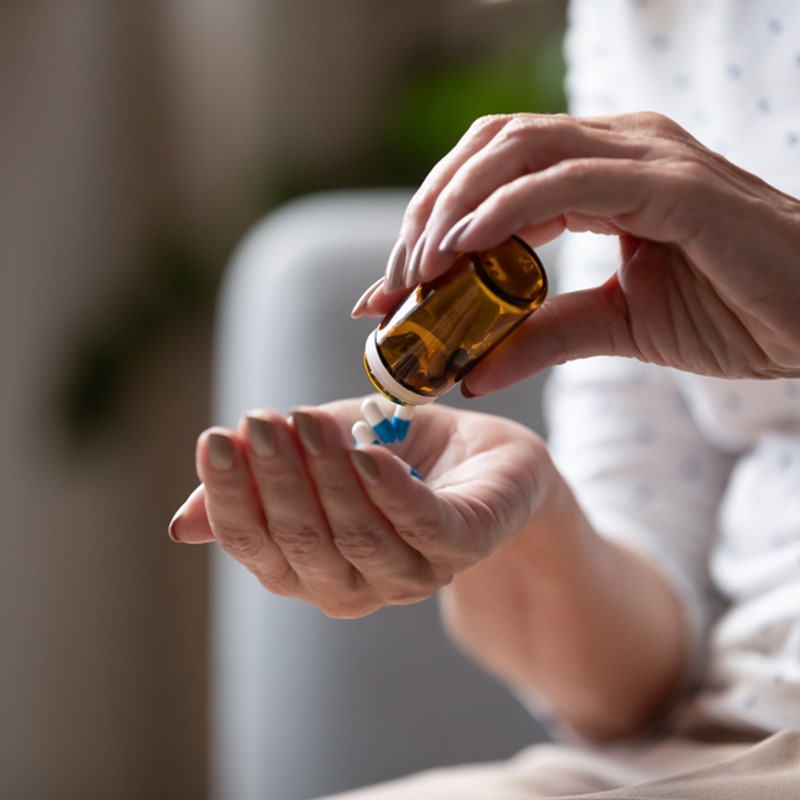 Supplements and functional foods should not replace a healthy diet

There are some people that will be prescribed supplements, for example iron for iron deficiency anaemia. Some people choose to take other supplements because they believe they will benefit their health but there is not enough strong evidence that currently supports their use.

For example, according to some research, having more than an average of 1.5mg a day of vitamin A over many years may affect your bones, making them more likely to fracture. As a precaution, it may be advisable for people at increased risk of osteoporosis, such as post-menopausal women and older people, not to consume vitamin A at intakes greater than 1.5mg/day. This could be achieved by ensuring that supplements containing vitamin A are limited (including those containing fish liver oil), particularly if you eat liver, as liver and its products like pate are particularly high in vitamin A.

'Functional food’ is a term used to describe a food modified in some way that may provide health benefits over and above the nutritional value of the food. For example, plant stanols and sterols found in some fat spreads and dairy products can help lower cholesterol.

Fat spreads are important sources of vitamins A and D in the UK diet because of voluntary fortification. White and brown flour (not wholemeal) are also fortified by law with iron, calcium, thiamin and niacin. 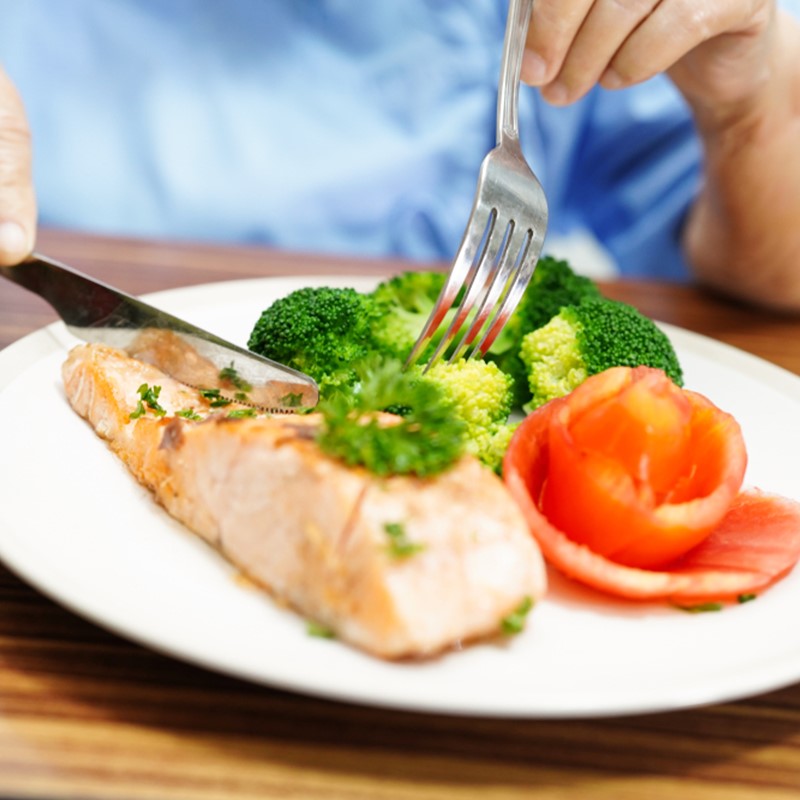