Learn about the balance of different foods and nutrients needed in the diet for good health and wellbeing.

The science of a healthy, balanced diet

National and international health bodies have a responsibility to provide guidance for people on how to follow a healthy, balanced diet. Food-based dietary guidance is a key tool in showing how to meet both food and nutrient-based recommendations and providing practical tools for consumers to follow. Different methods can be used to develop food-based dietary guidance and the UK Eatwell Guide is based on optimization modelling, which calculated the proportions of the main food groups needed to meet current UK recommendations. The modelling showed that substantial changes are need to current diets to bring us closer to a dietary pattern consistent with the Eatwell Guide. Later analysis found that closer adherence to the Eatwell Guide recommendations reduced mortality risk by 7% as well as reducing carbon emissions by 30%.

Several different research tools to measure adherence to healthier dietary patterns have been developed including the Healthy Eating Index (HEI), based on US dietary recommendations and various measures for adherence to a Mediterranean style eating pattern. Studies using these generally find positive associations between following a healthier dietary pattern and better health outcomes.

The broad principles of healthy eating are fairly consistent across guidance from authoritative bodies and in scientific research on dietary patterns associated with lower disease risk. What is much more challenging is encouraging the changes to eating behaviour that are needed to get more people in the population to follow healthy eating guidance.

While nutrition recommendations often focus on individual nutrients or food components, people eat foods, not nutrients and so food-based advice is important to help people put nutrition recommendations into practice. Governments around the world have developed food-based dietary guidelines to communicate healthy eating dietary recommendation in a nationally and culturally appropriate and practical way. These take a range of different visual forms but typically divide foods into food groups and provide advice on the proportion each of these should make up in the diet. Most guidelines also include a range of advice for people on how to put this into practice, including guidance on making healthier choices within the food groups (such as choosing wholegrain foods), how often to eat specific types of food (such as 5 A DAY), information on appropriate portion sizes for different foods as well tools such as planners or recipes.

While presentation of national food-based dietary guidance varies from country to country, the dietary pattern they present is broadly similar, with fruit and vegetables and starchy foods making up the largest groups, often with a particular focus on wholegrains. Dairy foods and protein food groups make up a smaller proportion, along with advice to limit foods high in fat, salt and sugar.

UK food-based guidance has been through several iterations over the decades. Most recently, following changes to recommendations on fibre and free sugars in 2015, the government redeveloped the UK model the Eatwell Guide (then the Eatwell Plate) to take these changes into account. Different scientific methods to recalculate the proportions of the food groups in the guide were considered and optimisation modelling using linear programming was selected. This used statistical techniques to model how current diets would need to change to meet current nutrition recommendations – both nutrient recommendations such as those for fibre and free sugars and food-based recommendations including 5 A DAY and the recommendation to have two portions of fish a week, one of which should be oily.

This modelling was carried out by scientists at the University of Oxford using data on dietary intakes from the National Diet and Nutrition Survey (NDNS).

Studies that have looked at the effect of following the Eatwell Guide compared to the average diet in the UK have found that it could significantly improve population health. One analysis carried out in 2016 when the Eatwell Guide was revised found that following the guidance (without increasing energy intake) could potentially avoid 17.8 million years of ill-health or early death (disability adjusted life years or DALYs) over the lifetime of the population.

Much of the benefit seen was due to prevention of type 2 diabetes as well as prevention of cancer and cardiovascular disease. Another analysis carried out in 2020, found that following at least five of the nine Eatwell Guide recommendations reduced mortality risk by approximately 7% as well as reducing carbon emissions by 30% compared to following 2 or fewer of the recommendations.

While there is increasing evidence for the benefits following healthier dietary patterns as set out in the Eatwell Guide and other models, we are a long way from making this a reality. As shown in the studies mentioned above, significant changes in eating habits are needed for current average UK diets to meet Eatwell Guide recommendations. It has been estimated that less than 1% of the population meet all current dietary guidelines and that only about 30% are meeting five or more of the nine specific recommendations in the Eatwell Guide.

While trend data from the NDNS from 2008-2017 shows that there has been some progress in reducing intakes of free sugars and sugary drinks in recent years, intakes of free sugars, saturated fat and salt remain higher then recommended and there has been no appreciable increase in fruit and vegetable, fish or fibre intakes. The broad principles of what makes up a healthy diet are well established but the challenge of how to encourage people in the population to take up this advice remains. 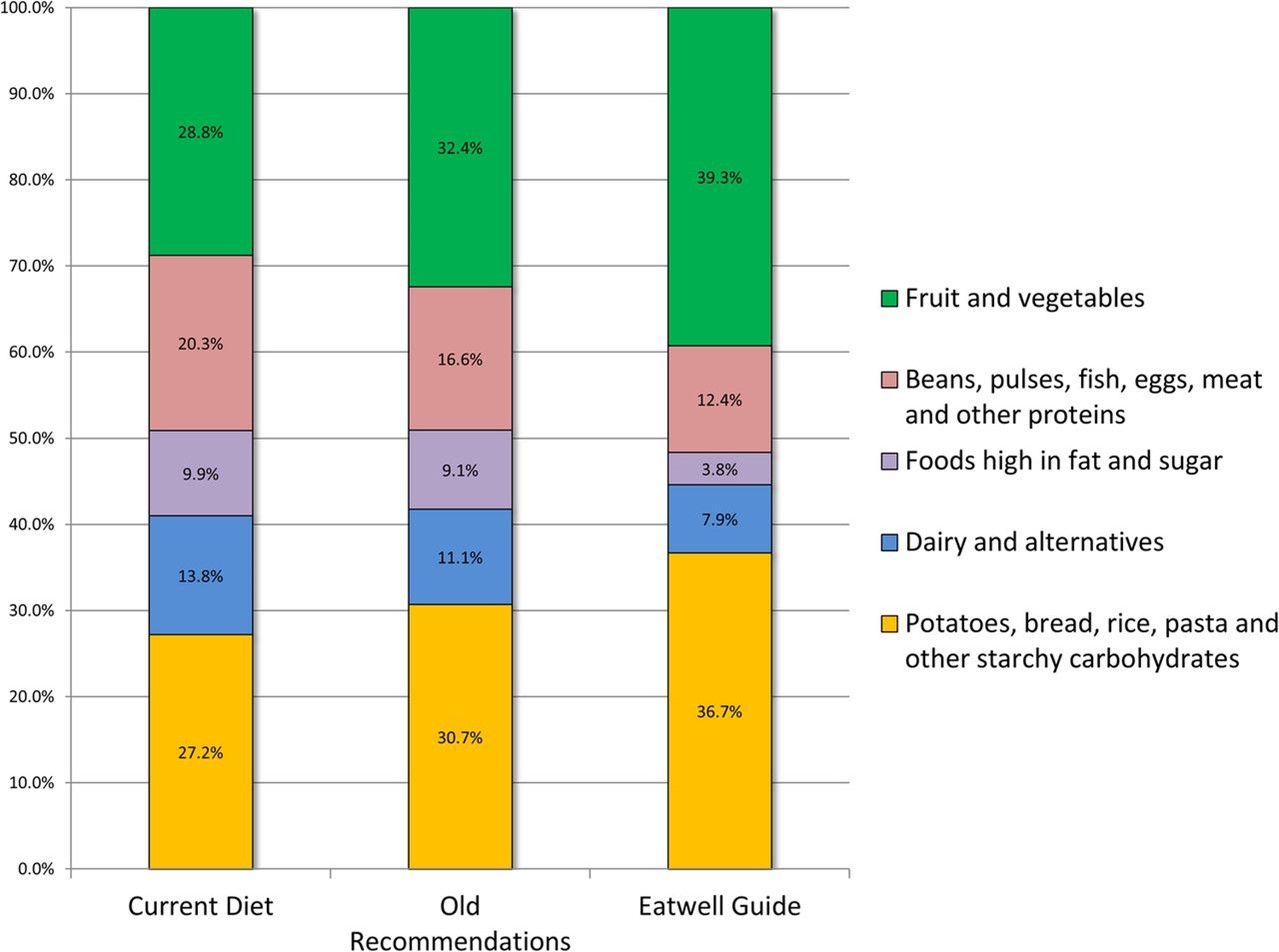 In recognition of the importance of dietary patterns rather than single foods or nutrients, researchers have developed methods for measuring healthy diets as part of cohort or intervention studies. This section will look at some examples of these measures and studies that have used them

The Healthy Eating Index (HEI) is a measure of diet quality used to assess how well a set of foods aligns with key recommendations of the Dietary Guidelines for Americans.

The HEI-2015 includes 13 components that reflect the key recommendations in the 2015-2020 guidelines. There are two groups:

‘Adequacy components’ represent the elements of the diet that are encouraged in the guidelines. For these components, higher scores reflect higher intakes, because higher intakes are desirable.

The adequacy components are:

Overall, a higher total HEI score suggests a diet that aligns better with the US dietary recommendations. Studies have found that greater adherence to the HEI is associated with lower risk of all-cause, cardiovascular and cancer mortality.

The Alternative Healthy Eating Index (AHEI) was developed as an alternative to the HEI and focussed on foods and nutrients associated with reducing the risk of chronic disease. It is based on 11 components: six where the highest intakes are considered ideal (vegetables, fruit, whole grains, nuts and legumes, long chain omega-3 fats [docosahexaenoic acid and eicosapentaenoic acid], and polyunsaturated fatty acids), alcohol, for which moderate intake was considered ideal, and four components for which avoidance was recommended (sugar sweetened drinks and fruit juice, red and processed meat, trans fat and sodium). Each component is given a score between zero and ten, all the components adding up to a potential maximum score of 110, with higher scores suggesting better dietary quality.

The DASH diet was developed to help lower blood pressure and it emphasises higher consumption of fruit, vegetables, legumes and nuts, wholegrains and low-fat dairy​ and limits sugary drinks, meat and sodium​. The DASH score quantifies the level of adherence to the diet.

A systematic review and meta-analysis looking at dietary quality as assessed by the HEI, AHEI and the Dietary Approaches to Stop Hypertension (DASH) scores and health outcomes found that higher diet quality according to these methods was associated with reduced risk of all-cause mortality, reduced risk of cardiovascular and cancer incidence and mortality as well as reduced risk of type 2 diabetes and neurodegenerative disease.

The Nordic diet focusses on healthier foods that are locally produced in the Nordic region, and which are considered of importance to cultural and gastronomic identity in these countries. A Nordic style diet generally includes fruits such as apples, pears and berries, vegetables including roots, cruciferous vegetables and cabbages, as well as wholegrain and rye breads, a high intake of fish, low-fat dairy products, potatoes and vegetable fats. Different scores have been developed to define a healthy Nordic diet, including the Baltic Sea Diet score (from Finland), Healthy Nordic Food Index (from Denmark) and the New Nordic Diet score (from Norway). Evidence from observational studies suggest that a Healthy Nordic is associated with lower risk of type 2 diabetes, stroke and a reduced risk of mortality (particularly from cardiovascular disease). Results from a small number of trials also suggest that a Nordic diet may help improve body weight, blood pressure and blood lipids. However, there is a general lack of evidence in non-Nordic populations to support these potentially beneficial effects if such a dietary pattern is adopted more widely.

The Mediterranean diet, which is usually used to refer to the types of diets traditionally consumed in countries such as Italy and Greece, has been the subject of a lot of research over recent decades. Researchers have developed several different ways of measuring adherence to a Mediterranean dietary pattern. While these differ in exactly what is included and how the score is calculated, higher consumption of fruit, vegetables, legumes, cereals, olive oil and fish and lower intakes of meat, dairy foods eggs and sugar are generally included. Research suggests that greater adherence to a Mediterranean diet may be associated with lower risk of coronary heart disease, lower levels of inflammation and a reduced risk of cognitive decline.

A factsheet looking at nutrition requirements for all ages.